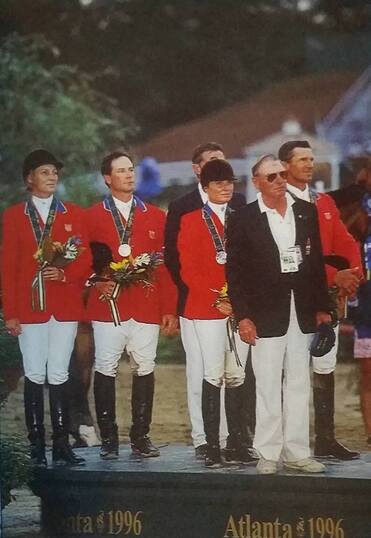 Peter Leone is an Olympic Silver Medalist, International Grand Prix rider, broadcaster, and author who has represented the United States Equestrian Team on numerous occasions. He has been to six World Cup Finals and continues to win at the most prestigious shows in the world.

Leone trained with many prominent horsemen including Bertlan DeNemethy, Frank Chapot, George Morris, and Michael Matz. After completing a successful junior career, Peter won the International Jumping Derby in Newport, Rhode Island, then regarded as the most challenging show jumping event in the nation. In 1982, he helped the United States finish fourth in the World Championships in Dublin, Ireland. Together with his two brothers Armand and Mark, he was named the 1984 Horseman of the Year by the New Jersey Equine Advisory Board in the United States of America. He accomplished all of this while gaining a Bachelor of Arts degree from Drew University.

Upon graduating, Leone set out to the corporate world. He was climbing the corporate ladder during the week and winning Grand Prixs on the weekends. In 1994, Peter established Lionshare Farm, a world-class training facility. He achieved a lifelong dream when he represented the United States in the 1996 Atlanta Olympic Games and helped the U.S. win the team Silver Medal aboard Crown Royal Legato.

Peter’s great understanding of the sport and experience have made him a successful instructor, author, DVD producer, clinician, and broadcaster. Peter’s book “Peter Leone's Show Jumping Clinic: Success Strategies for Equestrian Competitors” has been highly successful along with his training DVD, “Ride the Body: Select Insights of Peter Leone”. He is a regular broadcaster on the daily WVVH-TV Hampton Classic broadcasts.

Leone trains and teaches from his Lionshare Farm in Bedford, NY where the care and well-being of the horse is top priority. The scenic 200-acre facility has 45 stalls, beautiful grass paddocks, large outdoor and indoor arenas, and a grass Grand Prix field enable students and horses to properly prepare for competition anywhere in the world. His brand new Wellington, Florida facility is home for the winter show season.